Can we slow or eliminate aging? Investors say: yes. 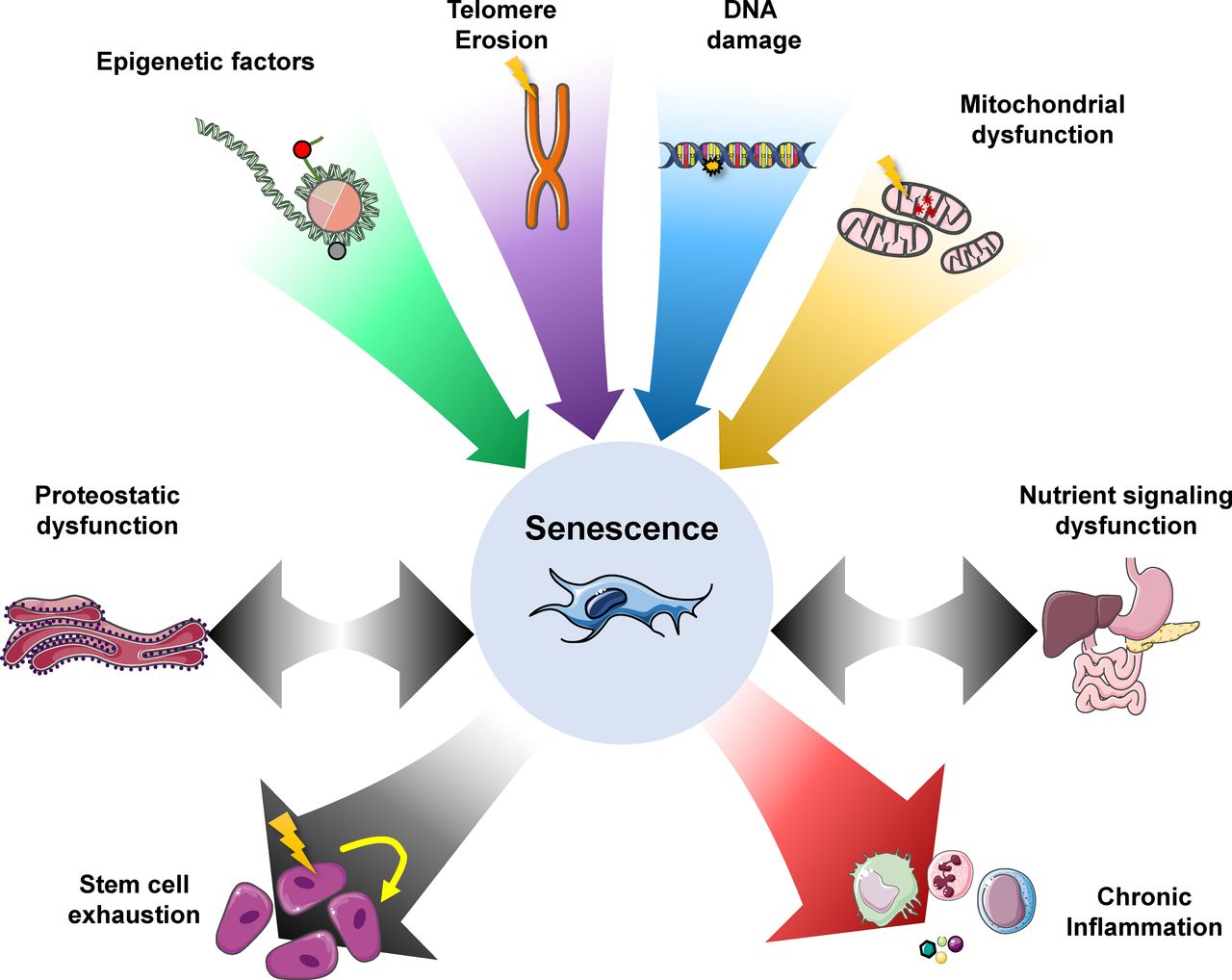 Last century we found treatments for cancer, developed antibiotics, expanded medical imaging systems, and made heart interventions commonplace. This century can we slow the aging process? Investors say, "yes!" Their financial capital is nourishing a confluence that includes new medical breakthroughs and ardent radical life extension advocates. Now, the elimination of or slowing of aging looks like a realistic goal in the next 10 years. Thinkers have been imagining this moment for some time as you'll learn reading the history of the anti-aging research movement. People are already debating the ethics of longevity but what really happens if we find the keys to aging and end the process of growing old? Most importantly, how will it impact you?

Image at left depicting causes of cell senescence is courtesy of the Journal of Cell Biology. The image can be enlarged at its source.

If you're an investor this boom in the number of startups focusing on anti-aging research could impact your pocketbook by reaping substantial future returns. Business Insider reports that investment interest in anti-aging startups is skyrocketing with Venture capital rising 158% in just five years totaling nearly $1 billion. "Given it's huge potential financial benefits anti aging science has tremendous commercial opportunities," authors write at Science Direct in the article titled The Business of Anti-Aging Science. "...driven by more recent scientific breakthroughs it has been growing substantially with several young companies supported by world-leading companies like Google." Check out Science Direct for a long list of anti-aging biotechs. Biopharmaceuticals looking for anti-aging success are just one market in a massive $15 Trillion anti-aging industry yet they're the only market that could bring real improvements to our quality of life in later years and the only one that may turn our assumption about aging on its head.

How will our assumptions on aging be upended? Today we take aging and age related illness as a given. We try to avoid it with plastic surgery and healthful habits but most people assume that the body will eventually wear out. Longevity advocates, however, have tirelessly asserted that aging is something we can overcome. Aging, they say, is the disease. It's an umbrella arching over a set of symptoms such as heart attack, cancer, or arthritis. Rather than trying to address the symptoms we should be attacking the disease, they explain. Their inspiration is driving the search to develop interventions that arrest the degenerative effects of age by isolating its biological causes. You and I may very likely witness the beginning of medicines that repair or eliminate degenerative conditions caused by aging. And we will never look at aging the same way again. At this point, however, there's no chance of achieving immortality though Gordon Lithgow, of the Buck Institute for Research on Aging, shares an interesting perspective in the video below. In simple laboratory animals, he says, lifespan has been increased by 100% through science and we're beginning to see aging as a "plastic" condition.

Anti-aging research is coming of age today in part because labs have well defined research direction based on known hallmarks of aging. These hallmarks are the culmination of years of tenacious research and are widely believed to explain why we age. Startups address one or more hallmark, vary in their approach, and focus it on a particular aging condition such osteoporosis. A senolytic research approach, for instance, probes the cause of cell senescence, cells that stop dividing normally. Recent senolytic research shows us that successfully addressing one hallmark produces a beneficial effect on others--a development many researchers were amazed to discover. The boom in anti aging research is in its early phase. Researchers hope to develop solutions for aging problems like arthritis, knee surgery, cognitive impairment and much more.

You might be surprised to learn that anti-aging research isn't just in the test tube phase. Some existing drugs show tantalizing possibilities for aiding longevity. Quercitin, for instance, an over the counter supplement, combined with dasatinib, a leukemia drug, shows promise in treating pulmonary fibrosis a lung condition triggered by cell senescence. Rapamycin, a compound found in the soil on Easter Island and first used in transplant patients to suppress immune response, also appears to have anti-aging properties. Now, with research dollars flowing, the science is blooming.

Mike West, CEO of Agex Therapeutics shares his common sense belief in today's research by relaying an anecdote about his father's automotive shop in the video below. He adds, "I'm a fan of slowing aging but slowing aging will not help all the people right now with degenerative joint disease, or spinal degeneration or heart failure," he states, "....we need to go out and give them new heart muscle, new cartilage... We can take the science we have which is just miraculous really. I mean it really is. You guys know what's going on in the labs right? What's going on in the labs right now is just amazing but applying it to meet the needs of a society that's already old is the smartest investment in my opinion."  West contends that 80% of US health costs are currently directed at managing degenerative diseases caused by aging.

If you are an interested investor- or just interested- take time to watch the twenty minute video above. It provides an overview of longevity science, the history of longevity research, the state of the industry, and why it's breaking out today. Aubrey deGrey, a life long pioneer of longevity research, states, above, that there's a synergy to all the research and developments now. They "will add up to considerably more than the sum of the parts," he said. In other words, understand the keys to aging and you enrich studies on treating age related conditions. Enjoy success treating an age related condition and you extend the life spans of people with those diseases.

What lies ahead in medical innovation? If last century is a measure we'll see advances that we can't imagine today. Will it include longevity? Maybe. Certainly we're at the dawn of understanding mechanisms that cause us to age. Thanks to an outpouring of investment capital age-related researchers and longevity themed biotechs are full speed ahead.  Will it mean an end to degenerative disease? Some experts in the field say that's within our grasp. Society is accustomed to wondering if 80 is the new 40? And there are plenty of substantive examples. Why is it far fetched to think that 80 would one day be 25?

Disclaimer: I'm an amateur investor who is excited about the research field but do not in any way mean to advise your investment in anti-aging biotechs. This field is brand new and as yet very high risk. The biotech industry in general is vulnerable to failures and reverse stock splits that dilute or degrade value. There will, in fact, be many failures on the road to success and success is 10 to 20 years off according to most experts.

Update Sept 2020: In the video below, de Grey states: Aging is simply the accumulation of damage in the body on the molecular and cellular level and that damage can in principal be repaired.

The Past As It Looked Back Then

The Best of Times

Put a smile on your face!