How Could It Be A Concussion? I Didn't Hit My Head!

Let's bust a myth! You don't have to hit your head to have a concussion. You don't have to lose consciousness to be concussed. In fact repeated falls, hard falls on knees or the bottom--- even hitting the head on a door or counter can cause concussion in older adults. That's right. Our older bodies are more vulnerable to concussive events and they take longer to recover. Read on to learn if you're at risk, how you can monitor for concussion symptoms and what steps to take if there's a possibility you're concussed.

Concussions are a kind of brain injury. When we're young we largely recover from them with proper care. When we're older risk factors and changes in our brains leave us more vulnerable. Why? Dr Kathleen Bell, of UT Southwestern Medical Center explains that some degree of brain shrinkage is common as we age. That shrinkage leaves a gap between the skull and the brain allowing the brain to jostle when our bodies are jolted. When the jolt is strong enough to cause the brain to collide with our hard skull it results in some degree of trauma causing concussion or triggering an extended concussion syndrome. Recent research is documenting that concussions at middle age appear to also significantly increase the risk of later life dementia and other neurological conditions.

CT or MRI scans are often performed if a concussion is suspected. However, most scans come back normal. A normal scan should not be the last word. Concussion symptoms can manifest hours even days after the initial injury. Not seeing injury on the CT may cause doctors and patients to miss a developing brain bleed or a clot. Speak up. If you have symptoms that develop after the initial evaluation let your doctor know immediately. As we age our bodies are more at risk for brain bleeds and late developing bleeds. Why? Blood vessels thin with age and are easier to damage. In addition, if you are a heavy drinker or are taking blood thinners including anti inflammatory medicines and aspirins you're at higher risk of bleeds from a fall. Be vigilant in the days following any hard jolt to the body or blow to the head. Some symptoms of a brain bleed overlap symptoms of a concussion however you may also notice: a sudden severe headache, tingling or numbness, difficulty speaking, weakness in your arm or leg. If you have any of these symptoms after a fall return to the emergency room or call your doctor immediately. Brain bleeds can cause brain damage or death. You might be surprised to know that more than 30,000 people a year 65 years of age and older die after a fall. 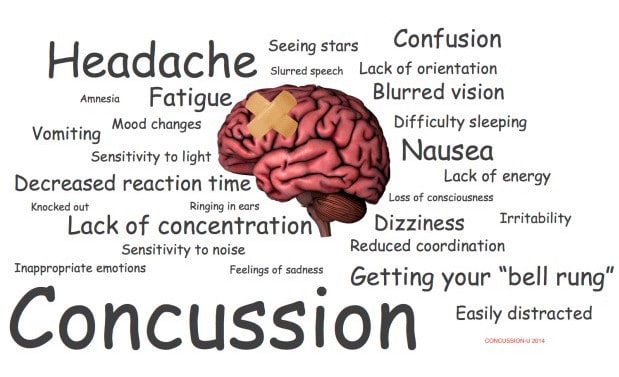 What are concussion symptoms? Common symptoms range from confusion to irritability. In older adults even sudden changes as seemingly far removed as bladder incontinence that develop after a fall can indicate a concussion. If you've been experiencing dizzyness, balance problems, light sensitivity, sleep disturbance, nausea or trouble with concentration that you weren't having before a fall or that have qualitatively worsened call your doctor immediately and ask for a followup concussion evaluation. Be a strong self-advocate. All these symptoms can be rationalized as something else especially if you have dementia or a mental health disturbance. However, if you've just had a fall, an auto accident, or a blow to the head you have a significant chance of concussion, post concussion syndrome or post concussion symptoms.

Research on concussions from falls in older adults has been slow to develop. Most of what we know about concussion comes from studies of younger primarily male patients. However, recent CDC research, CBS News reports, shows that older adults are experiencing the highest incidence of concussions and resultant brain injury among all age groups.  According to the CDC four in five cases of Traumatic Brain injury in people 65+ were caused by a fall and every 11 seconds an older adult is seen in the Emergency room because they fell.  Need I state that falls are serious hazards as we age. Take advantage of Falls Prevention Awareness month, every September, and use available resources to add  fall prevention exercises and planning into your life.

As we pass midlife we're prompted to learn more about new risks that our aging biological systems face. By busting medical myths and arming ourselves with information we can live a long healthy life. So, if you should fall or experience a hard jolt to your body carefully monitor your health in the hours and days that follow. Concussions and more dangerous brain bleeds may have a delayed onset of hours or even days later. If you do have a concussion, seek medical help, and please take care of yourself. Eat well, let yourself rest. That's good advice everyday but much more important when your brain is healing.

40 Years of History in 3 Minutes

A Golden Oldies Jukebox, Just for You

Your Life in Pictures!