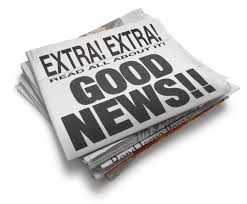 We hear too little about the good works of this industrious and generous county. So, over the past months I've been on a search for sources of good news. Here's what I've found: an abundance of people helping others, good choices made when temptation offers a different road, altruism in practice, lives turned around, and people finding renewed meaning. These are the stories that nourish life.

Dr. Rob Marsh was named "Country Doctor of the Year" in part for his clinic services at the largest truck stop in the United States. "I want our drivers to know--- This is not a fly by night...I'm established. I've been here for 20 years and I'll be here for another 20," he says with kindly assurance in an ABC positive news profile. Marsh's promise has turned the road into a friendlier, healthier place at our nation's busiest truck stop. Stories like Marsh's can be found at most major networks. Some, like NBC, close their nightly television broadcast with heartwarming news. Others simply put good news stories on a network affiliated website. This month Pulitzer Prize winning Arianne Huffington announced that she's taking the trend one step further. "The choices media organizations have made to focus mostly on bad news ...is having real consequences," she told NPR this month. At HuffPost, she elaborates on her ambitious project to change both the world of journalism and the world we live in by shifting Huffington Post's focus to positive news stories. "A more positive form of journalism will not only benefit our well-being; it will engage us in society, and it will help catalyze potential solutions to the problems that we face," she predicted.

Huffington may be eyeing the growing popularity of non network websites dedicated only to positive news. "Digital Jobs Drive Hollywood Employment To Highest Level in a Decade" leads at the Good News Network. Positive News, a website out of England and Wales, features UK Solar Capacity Almost Doubled in 2014. 10 Ways to Live Simply in 2015 headlines at Daily Good.  "The world is full of everyday heroes and true stories of transformation," the Daily Good team writes describing the inspiration for their website. Daily Good has been publishing since 1998. Nationswell is a newer media platform sponsored by a bi-partisan council that's passionate about service leadership. "When you shift the lens from the places that receive most of the [media] coverage you can discover extraordinary people building solutions to our defining national challenges," the NationSwell organization explains in the video below.

Good news is still a new media phenomenon. Fatigued by bad news over the past 20 years many people are craving a change. Psychology Today focused on the impact of bad news in 2012 and again in a 2014 study, co-sponsored by the Harvard School of Public Health, which linked increased stress in part to increased bad news. For every piece of bad news there's counterbalancing good news and the good news today is that media is beginning to change. Meanwhile, dial up some positive news sites. There's an exciting de-stressed world out there filled with peace and loving people.

Update April 2015: Check out this website of good news for teens! You might even find heartwarming stories there for yourself.

A Test You Will Ace

Life in the good old days!

Doris has a Couple of Secrets